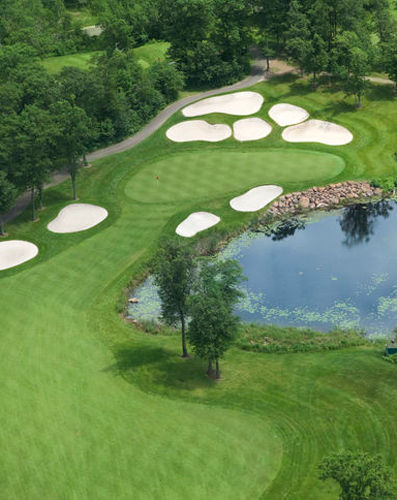 One of the most important, but least understood aspects of the game of golf involves what is called “course management”. Some people think course management refers to etiquette, others misinterpret it as the ability to make the proper club selection, while some players would simply guess that it applies to the people who get the best parking spots next to the pro shop door. In order for me to explain what it is, and how you can become better at it, I’ll need to take you back to when I first started playing the game at about age twelve.

My earliest experiences playing golf took place in the mid 60’s, back when shafts were wooden and golf balls were stuffed with feathers. Every Sunday my father would take me to his favorite golf course where I would hook up with my grandfather and aunt for a 9 hole round. In my mind I was far better than either of them. I hit much farther than they did, so obviously I was the superior player.

Nothing could be further from the truth. While I was trying to hit over, under, and through trees, bushes and hazards, they would walk a straight line from the tee to the green, just stopping long enough to hit a few shots along the way, and to glance over to me in my quest to return the ball back to the hole I was trying to play. When the 2 1/2 hours of torture was over, my grandfather would make it a point to loudly add up the scores (he knew it ticked me off). Just like so many times before, he would shoot 46, my aunt 47, and Joe 55. I wanted so much to kick some relative butt, I knew I was good enough, but what I didn’t know was that I wasn’t smart enough.

Good Advice from my Grandfather. And for You, Too

Finally, after many frustrating rounds, my grandfather gave me some advice that I vividly remember to this day. He asked me if there were any holes on the course that I thought I couldn’t make a bogey on. I laughed and said that there aren’t any holes on the course that I couldn’t par, what are you talking about. In a stern, but friendly voice, he reminded me that he didn’t ask me that question. So I told him that I thought I could make bogey on every hole. Then he asked what score would be the result of nine bogeys. I really had never thought of it, so I wasn’t quick to reply. After some quick math I responded with the number 44 (par 35). After he reminded me that I had never scored below 50, he said that the next time we played together, all he wanted me to do is make a bogey on every hole. Up to the challenge, the next time I went to the course I played with much less pressure and a whole new game plan. The result…. a 48, the best round of my life!!!

So, the point of the story? Course management is the ability to turn a 55 into a 48, with nothing but a change of attitude, and purpose.

If you are consistently shooting in the high 40’s and above, try this simple experiment. Before playing your next round, get a scorecard beforehand, and fill it out. The total score should add up to your normal round. Let’s say you usually shoot around 53. On your card you’ll have a lot of bogeys, but you will also be guilty of making some 7’s, 8’s, and maybe higher. I know when you look at the card your going to think that there is no way your going to make an 8 on that short par 5. Well let me remind you, this is reality, you need to make that 8 to reach your normal score. Now, when you play that next round, pretend you’re playing high stakes, and your opponent bet you $20 that you’ll make an 8 on this hole, the short par 5 (he’s already seen the card), I would imagine that you will do whatever it takes to make less than an 8 on the hole. That might involve chipping out, instead of trying to hit through the trees, or hitting to the right side of the green instead of going for the pin and ending up in the bunker. Your future has been laid out in front of you, are you wise enough to avoid making the mistakes that you know you normally make?

Manage to Your Lower Score

Too many times I see young players tee off with the attitude that if I don’t shoot par I don’t care what I shoot. These are people who constantly turn 42’s into 50’s. The first time they miss a green or hit a bad shot their world falls apart and so does their golf game. Remember, the tour players only hit 12 or 13 greens in regulation on average, so they hit quite a few bad shots too. The difference is that they are able to recover from poor shots, hardly ever making more than a bogey.

Course management is not something I can teach you on the range. All I can do is offer advice like my grandfather did to me. Analyze the way you play golf. Are your scores high because you make silly mistakes? If so, the next time you hit your tee shot in trouble, say to yourself, I bet this is the hole I’m going to take that 9 on, and play the rest of the hole with the purpose of making less than a 9. With this attitude I think you’ll “manage” to lower your score.

Believe In Your Game