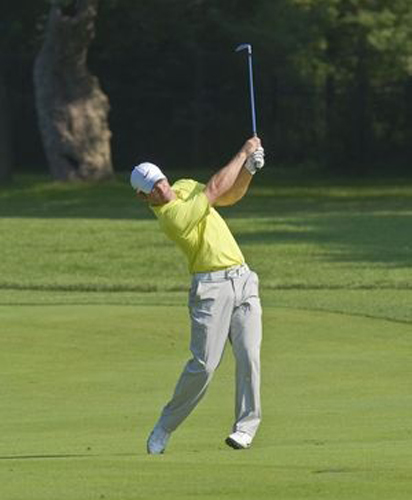 “Please Release Me, Let Me Go”. I wonder if famous singer Englebert Humperdinck was thinking about his golf swing when he recorded that song. If he was, then he is probably in a very small minority of players who understand exactly what it means to release the club in your swing.

The “release” is probably one of the most misunderstood and misinterpreted fundamentals of the golf swing. If you ask most golfers to define the “release”, you’ll get answers ranging from, turning the wrists over, to uncocking the wrist, to pulling the club through. I would like to set the record straight and make the “release” a much easier concept to understand. The song says it all…”Please release me, let me go”.

I interpret the “release” as the position in your swing where you have a tremendous amount of stored energy that needs to be transferred through the ball and to the target. In order to accomplish this feat correctly, one must “let it go”. The clubhead has got to be slung, flung, catapulted or any other defining word you can think of.

To better understand my execution of a proper “release”, think of the mechanics of pole vaulting. The vaulter holds the pole with both hands, then runs as fast as he can, down the runway. The more speed he can generate, the more likely he will have a successful jump. Next, he carefully plants the bottom of the pole in a stationary base. Now, one could actually watch all the energy produced from this speed go from the bottom of the pole to the top. He has a tremendous amount of leverage, or whip that will send him sailing over the standard.

The same principles apply to the golf swing. As a right handed player pulls the club down with his left hand on his downswing, he is building up speed and energy. Now the player should do the same thing as the vaulter. Plant the bottom of the club (butt-end of grip) in that stationary base and let the energy fling, sling, or catapult outward, to the clubhead. As the energy is “released”, the ball will explode off of the club-face and be rocketed towards the target. There will be much more clubhead speed than ever before.

But don’t take my word for it, Englebert had the right idea long before I did.